Rail side hedgerow trials at Hadley Wood Station – an update

You are here:
Science 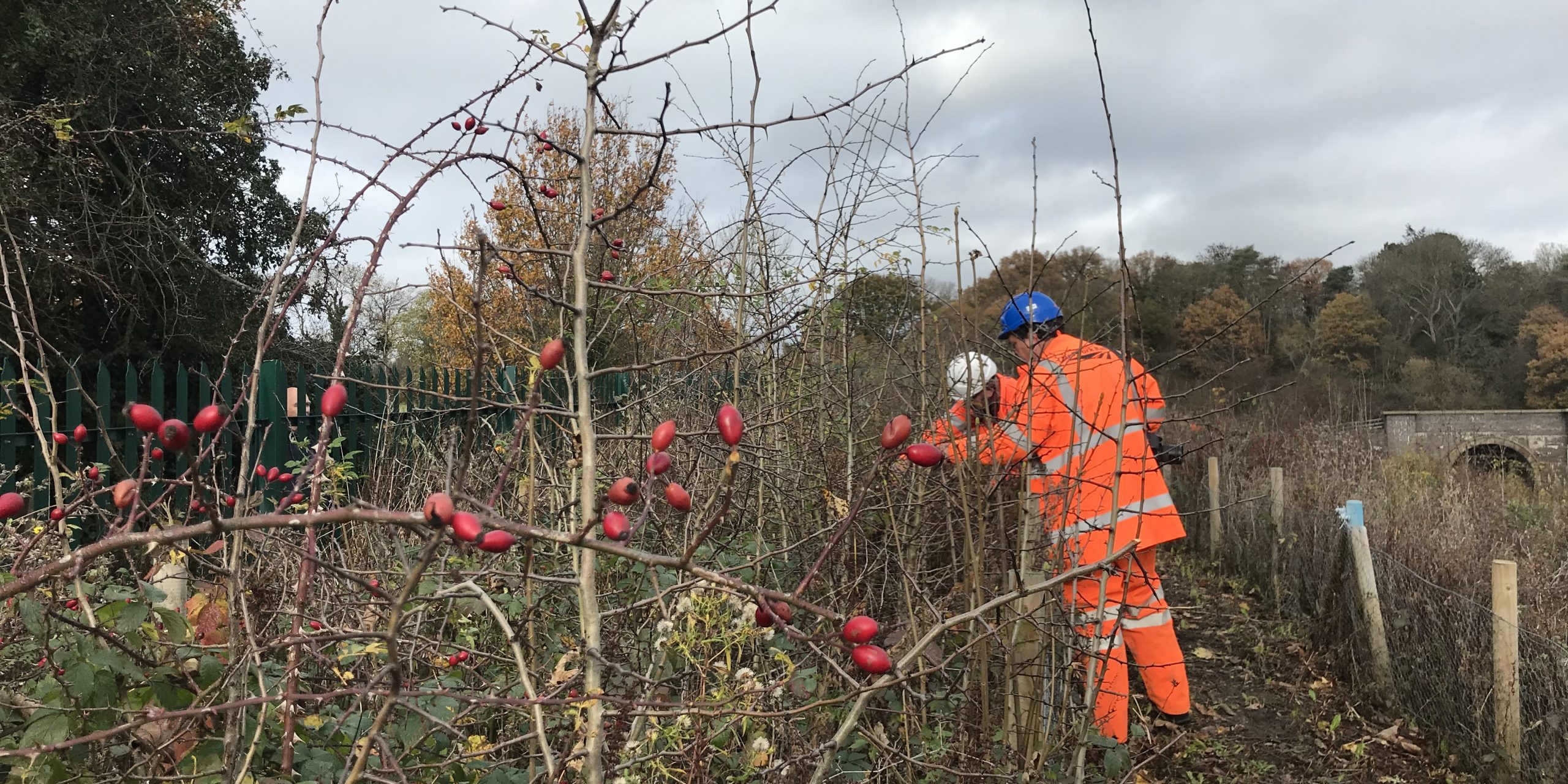 Harriet Rix, Science & Research Projects Manager, provides an update on some innovative hedgerow trials we’re carrying out along the rail side in north London in partnership with Network Rail and community partners

In partnership with Network Rail, the Hadley Wood Association and Hadley Wood Rail User Group, we launched a trial in 2018 to reinvigorate lineside vegetation management along a stretch of the rail side at Hadley Wood Station. Two years later, though Covid has prevented a regular inspection of the hedge planting trials on the South slope at Hadley Wood across the spring and summer,  we were able to make a socially-distanced visit last week.

We believe that this trial is unique in the UK; it tests three methods of hedge establishment, planting of whips (very young trees), natural regeneration, and planting from seed. The plots were rabbit-wired off, but otherwise no maintenance has been carried out since planting, by design.

Walking up from the gate, we were struck by the impressive growth of the whip-planted section of the hedge.  In this area 5 whips per 5m squared were planted and the success rate was superb – particularly in light of the very dry spring and summer– they were at 6 ft and had a 98% survival rate – almost a hedge!

Unfortunately, a big difference could be seen in the other planting belt; in this area some of trees have been put in rather haphazardly, and as a result only 60% had survived, while those that had had spent the time putting down proper root systems and had not grown well, hovering around the 4ft mark. This demonstrates the importance of working closely with contractors and all involved in tree planting and maintenance to agree to good tree planting practices.

We left the second set of beds to regenerate naturally from seeds in the soil bank. After two years, the beds given over to natural regeneration showed only a few tree seeds had survived in the seed bank. Under a thick layer of brambles one plot showed 2 seedlings of sycamore, one of hawthorn and one of blackthorn (about 20cm tall) and the other 2 oaks and 3 hawthorn (about 20cm). We wait to see whether more dormant seeds will add to this in the coming years.

The patches of hedge planted from seed showed the most interesting results. We tried two types of ground preparation.  The seed which showed the greatest rates of germination and growth had been carefully planted; this was where the ground had been prepared with a rotovator, the soil then pushed to the side, the seed sown in the central strip, and the soil pushed over the top before watering. Here the seed had germinated thickly and all species planted (Field Maple (Acer campestre); Blackthorn (Prunus spinosa); Hawthorn (Crategus monogyna); Dogwood (Cornus sanguine); Dogrose (Rosa canina); Wayfaring Tree (Viburnam lantana))were growing strongly under a covering of bramble, reaching a height of 20 cm and a very high density.

The second method consisted of the ground being prepared with the rotovator, the soil being raked, seeded, watered and raked again to mix the seed. This method had a lower seed germination rate and showed an interesting species bias. While the mix planted was identical, hawthorn had come up more strongly in areas where brambles had shaded the ground, whereas in areas where grass was dominant, dogwood had come up more strongly. This could reflect the underwood property of hawthorn, which means the seedlings are adapted to shade, whereas dogwood tends to grow as a pioneer species across chalk grassland.

We also planted some standards of smaller-growing trees to add variety to the rail side. Unfortunately, some of these struggled, and  5 birch and 1 crab apple had died (partly as a result of deer damage). These have been replanted with 5 wild service and a crab apple tree.

In all, after two years the slope is green and shows some species richness, though much of this is dog rose and wild bramble. However the trials themselves are providing valuable evidence to help inform hedgerow planting on and off the rail side.